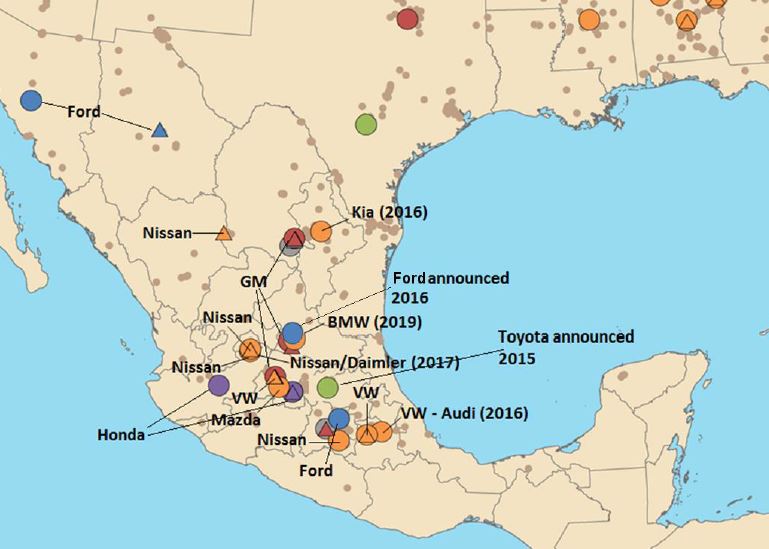 Total per Vehicle Cost Advantages of Producing a Vehicle in Mexico for U.S. or European Markets

Mexican automotive production has been a topic of recent debate. Since 2009, automakers—including BMW, Honda, Hyundai-Kia, Mazda, Nissan, Toyota, and VW/Audi—have announced eight new assembly plants investments in Mexico totaling $9 billion. What is missing from the conversation is that Mexico’s low labor costs may no longer be the prime driver of these investments; Mexico’s free trade agreements allow manufacturers to reach customers in countries representing 60 percent of the world’s GDP tariff-free.

CAR researchers estimate that making a vehicle in Mexico results in $600 to $700 lower labor costs per car than if the same vehicle were made in the United States.

Some of the benefit of lower labor costs in Mexico is offset by the higher worker attrition rates than found in U.S. assembly plants. However, labor cost savings only account for about half of the cost savings for vehicles that are then sold in the United States, and less than 15 percent of the total cost advantage for vehicles that are exported from Mexico to Europe for sale.

Mexico’s trade agreements, combined with its lower cost of manufacturing, result in tariff savings that can exceed $4,000 per vehicle for non-NAFTA exports for a $25,000 vehicle. It is important to note that Mexico’s FTA tariff advantage grows proportionally with vehicle value (e.g., for a vehicle costing $50,000, the advantage would grow to $5,000 in tariff-avoidance savings). CAR’s analysis makes clear: Mexico is more than just a low cost country—it’s a global export base.