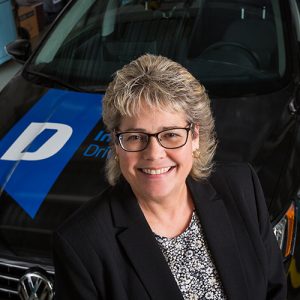 Mary Gustanski, is the senior vice president and chief technology officer for Delphi Technologies, formerly Delphi Automotive.  In this role, Gustanski is responsible for the company’s innovation and global technologies, including advanced propulsion systems for future vehicle electrification. Prior to this role, she served as vice president, Engineering & Program Management for Delphi Automotive, which spun off its propulsion business to become Delphi Technologies in 2017.

Ms. Gustanski began her 37-year career as a college cooperative student at the former AC Spark Plug Division of General Motors. She was hired full time as an associate manufacturing engineer in April 1985, and went on to hold several positions in engineering and manufacturing, including senior manufacturing project engineer, senior project engineer and production superintendent, prior to being promoted to divisional plant quality manager in 1997. Ms. Gustanski became chief engineer for Generators in 1998 and was promoted in 2001 to Technical Center Director. In 2003, she was named global director of manufacturing engineering.

In 2006, Ms. Gustanski was appointed as a member of the Powertrain Systems Executive Staff as the divisional director of engineering, Customer Satisfaction and Program Management. She was named as Delphi Powertrain’s vice president of Engineering, Operations & Customer Satisfaction in 2012 and in August 2014, was appointed to the corporate engineering team as vice president of Engineering and Program Management.

Ms. Gustanski was recognized as one of the “100 Leading Women in the North American Auto Industry” by Automotive News in 2010 and 2015.

Ms. Gustanski earned a bachelor’s degree in Mechanical Engineering as well as a master’s degree in Manufacturing Management from Kettering University (formerly GMI).