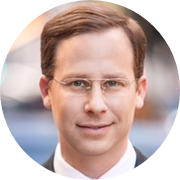 Jonathan Weinberger serves as the Chief Advocate for Global Transportation Technology Policy for General Motors. In this role, he is GM’s evangelist around domestic and international policy related to the future of mobility and advanced technology systems and amplifies GM’s competitive edge and business priorities.

Jonathan previously served as Executive Vice President at the U.S. Chamber of Commerce in Washington, D.C. in charge of its Global Innovation Policy Center. Before that, Jonathan was the Vice President of Innovation and Technology at the Auto Alliance, where he coordinated industry programming on issues surrounding autos and the Internet of Things (“IoT”).  Weinberger also led strategic efforts behind the launch of an “IoT” technology firm.

Prior to that, Weinberger served as Executive Secretary and Associate General Counsel in the White House Office of the U.S. Trade Representative.  He was lead litigator on autos related trade disputes with China and served as the intermediary with executives from several automakers.  Weinberger also served as Executive Secretary of the U.S. Treasury, and on the staffs of two Secretaries of State.

His wife, Morgan Ortagus, is a principal at Rubicon Founders based in Nashville, TN. They have a daughter, Adina, and reside between Nashville and Washington, DC.