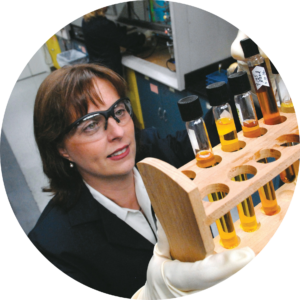 Dr. Deborah Mielewski is the Technical Fellow of Sustainability at Ford Motor Company.  She received her B.S.E. (’86), M.S.E. (’93) and PhD (’98) degrees in Chemical Engineering, from the University of Michigan in Ann Arbor, and has been with Ford Motor Company for 34 years.  Dr. Mielewski started her career at Ford Research in automotive paint durability, then moved to polymer processing and materials development.  Because of her passion for preserving the environment, she initiated the biomaterials program at Ford Research in 2001, when “being green” was not very popular.  Her team was the first to demonstrate soy-based foam that met all the requirements for automotive seating and Ford launched soy-based foam on the 2008 Mustang.  For the past 12 years, soy seat cushions, backs and headrests have been used on every Ford North American built vehicle (over 18.5 million vehicles).  Bio-based foams on Ford vehicles have collectively reduced greenhouse gas emissions by over 228 million pounds using over 687B soybeans, which also produces extra revenue for U.S. farmers.  Soy foam reduces petroleum dependence by over 5 million pounds annually.

The Sustainable and Emerging Materials group continues to pioneer the development of sustainable plastic materials that meet stringent automotive requirements, including natural fiber reinforced plastics and polymer resins made from renewable feed stocks.  Other successes are: wheat straw filled storage bins (2010 Ford Flex), tree-based cellulose composite armrest substrates (2013 Lincoln MKX) and console substrates (2019 Lincoln Continental).   Last year, Ford announced their intent to produce headlamp housings from a coffee chaff composite through a partnership with McDonalds, Competitive Green Technologies and the University of Guelph.  Ford currently has launched 10 plant-based materials in production vehicles, establishing a reputation as a leader in this space.  Dr. Mielewski’ s effort has also been actively involved in recent implementations of recycled materials such as carpet waste into under the hood components.

Dr. Mielewski is passionate about the work she does to reduce Ford’s environmental footprint and believes that these new materials are going to dominate the market in the future.  Her philosophy is to “do the right thing” in incremental, but ever advancing steps.  She has appeared in a Ford national commercial, the NOVA “Making Things” series, TEDx, and Smithsonian’s “The Age of Plastics” symposium.  She has been interviewed by countless media outlets, including Wall Street Journal, Time Inc., Greenbiz, Cheddar, Fox Business, CNBC and CNN.   She has over 60 referred journal publications and 20 U. S. patents.  Her work has been acknowledged with awards such as the Henry Ford Technology Award, the R&D100 Award, the Free Press Automotive Leadership Award, the Environmental Management Association Award, 5 SPE Environmental Innovation Awards and the American Chemical Society’s Industrial Innovation Award.