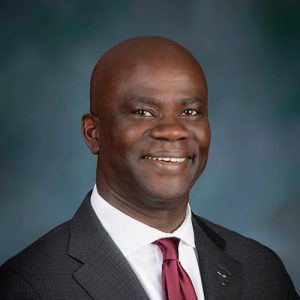 Paul C. Ajegba has 30 years of experience with the Michigan Department of Transportation, and was appointed by Governor Gretchen Whitmer as Director on Jan. 1, 2019.  He previously served MDOT for three months as Metro Region Engineer, and before that as University Region Engineer.  During his seven years in the University Region, Ajegba oversaw his team’s involvement in the planning, design and construction of several major projects, including the US-23 Flex Route – a project nominated for the America’s Transportation Award, landing among the top 12 national finalists. Other notable projects include the I-94 rehabilitation project in Ann Arbor/Jackson, the I-96/US-23 interchange, and the I-75 freeway project.

Paul is a member of COMTO (Conference of Minority Transportation Officials), and serves on the following boards:   AASHTO, ITS America, M-City, University of Michigan College of Engineering, the Engineering Society of Detroit, and the Mackinac Bridge Authority.