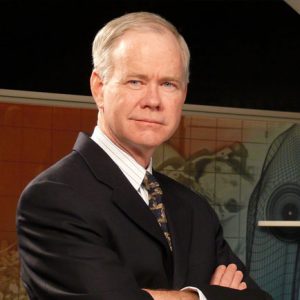 John McElroy is an influential thought leader in the automotive industry. He is a journalist, lecturer, commentator and entrepreneur. He created “Autoline Daily,” the first industry webcast of industry news and analysis. He is also the host of the television program “Autoline This Week,” an Emmy Award-winning, weekly half-hour discussion program featuring top automotive executives and journalists. And he co-hosts “Autoline After Hours,” a weekly live webcast that focuses on new cars and technology. The show can be seen online at www.Autoline.tv

Mr. McElroy brings an extensive background to covering the auto industry. He took his first plant tour when he was only six years old. As he got older, he read any and every book about cars he could get his hands on, which led to an understanding of automotive engineering principles. As his enthusiasm for cars grew, he successfully—though briefly—ventured into amateur road racing. He also gained valuable insight to the industry working as an hourly UAW employee in various automotive manufacturing plants while working his way through college.

As a journalist, Mr. McElroy put his automotive background to good use. His past experience includes five years at Detroit Editor for Road & Track, and as the American correspondent for World Cars, published by the Automotive Club of Italy. He was also invited to write the annual automotive entry for the Encyclopedia Britannica Yearbook. He spent most of his career at the trade magazine Automotive Industries where he ultimately rose to Editorial Director.

Mr. McElroy has appeared as an automotive expert on ABC World News Tonight, CBS News, and NBC Nightly News. He is often interviewed by CNN, NPR, and CBC in Canada. He is frequently asked to speak to automakers, suppliers and industry organizations. He is a member of the jury of the North American Car and Truck of the Year, and has won numerous awards for editorial excellence.

Mr. McElroy is the president of Blue Sky Productions, Inc., which produces television, radio, and digital content, including video production.

MBS 2019: Autoline This Week at MBS: Big Ideas and Shiny New Objects; Where are we Headed?